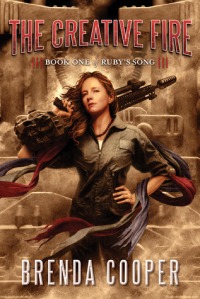 I’m challenging myself to read only novels by women and femme people for a full year, from March 2019 through March 2020. Read this post to get the full story!

My last Women’s Book March read for July is The Creative Fire by Brenda Cooper! This book explores what might happen if a revolution of the proletariat broke out on a generation ship traveling between the stars. Ruby Martin is a young “gray” (so named because of their gray uniforms), one of the repair and maintenance workers on the generation ship The Creative Fire.

According to Cooper, Ruby is loosely based on Eva Perón, the wife of Argentinian president Juan Perón and a political leader in her own right. At the beginning of the story, Ruby is prepared for a life of drudgery repairing robots, with no possibility of moving to other levels. Her one creative outlet, singing, seems like it will only remain a pasttime until a shipwide emergency throws her in with Fox, a “blue” from the higher levels and a music producer. Ruby seizes the chance to go to the blue levels with Fox, where for the first time she sees the chance to be a voice for her people.

Although the premise drew me in–generation ships! Art as a vehicle for revolution!–I ended up feeling decidedly lukewarm on this book. The story left too many questions unanswered, including why The Creative Fire began its multigenerational journey in the first place. There is a single comment made about collecting samples from other planets to bring back home, and that the grays are revolting in part to ensure they receive an equal portion of the payout for the samples when they return. However, we never learn what these samples are, what makes them valuable, or even what form the payment on their return would take.

Of course, we’re reading a novel here, not a cargo manifest. I wouldn’t have minded the lack of backstory if the main story were compelling. Although Ruby starts out with a clear motivation to improve life for her people, her arc gets a bit muddied when she actually begins to acquire fame as a singer. This could’ve been a solid growth arc in itself if the revolution’s stakes and costs had felt more urgent and immediate. However, the events Cooper chooses to focus on don’t put the reader in the thick of it: we spend more time hearing about the pitched battles and coups than witnessing them firsthand. Additionally, a persistent lack of sensory details made me feel like I was watching a televised version of this revolution instead of being there.

To its credit, The Creative Fire makes me want to learn more about the life of Eva Perón. Perón did much in Argentina to improve the lives of working families and women, and has been memorialized in fiction before in the musical Evita.

Already read The Creative Fire? Let me know what you thought in the comments!

This site uses Akismet to reduce spam. Learn how your comment data is processed.